What Causes Lower Back Pain After Car Accident?

What Causes Lower Back Pain After Car Accident?

Do people typically suffer from lower back pain after being rear-ended?

The lower back and neck are particularly sensitive to injury after a car accident. Your spine consists of four separate parts:

Looking at each of these parts can help us understand why lower back pain occurs after someone rear-ends us.

The sacral area is the very bottom of the spine. This area consists of the sacrum, a flat, nearly triangular shaped bone that is joined to the lumbar spine with a sacral hinge.

This hinge is the first place that brings movement into the spine. In general, the sacral area of the spine is a stable area for the hips. This area typically does not move.

The lower back, or lumbar spine

The lower back is an almost elastic part of the spine that consists of five lumbar vertebrae held together by tendons. These are cushioned by jelly-like intervertebral discs.

These vertebrae have different ranges of motion depending on the person’s anatomy, but there is a considerable amount of movement possible.

The thoracic spine consists of 12 vertebrae attached to the 12 ribs that enclose our vital organs. This middle part of the spine is solid and mostly immoveable.

It plays a critical part in protecting us when we get into car accidents. Instead of unprotected organs, ribs absorb much of the impact of the seatbelt when an accident occurs.

The six bones of the cervical spine win the award for most-mentioned when it comes to car accidents.

These are the bones that allow us to swivel our heads, but they are some of the smallest, most vulnerable parts of the spine in a car accident. 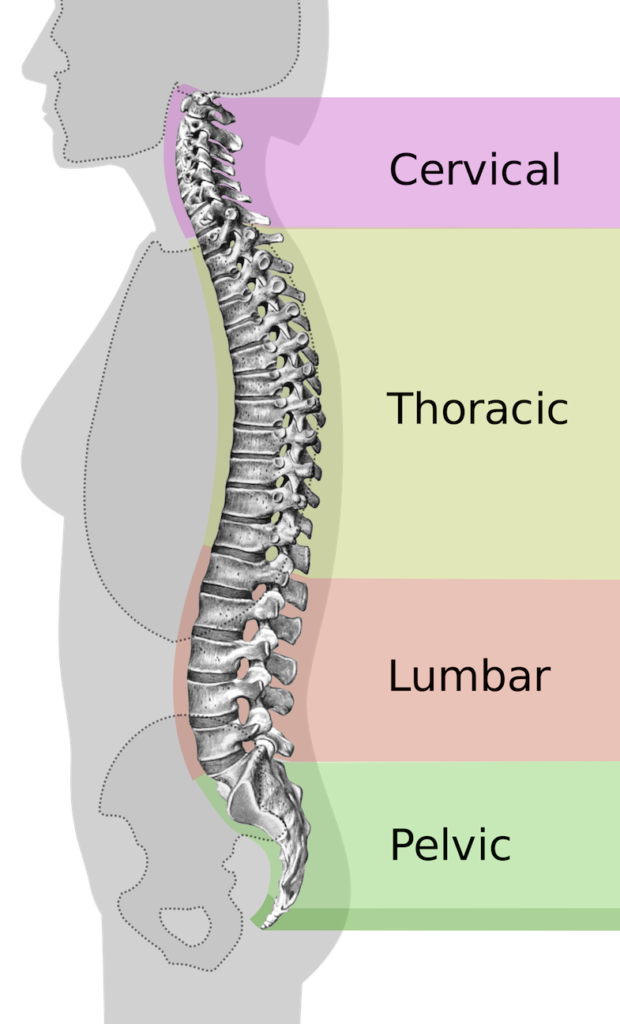 The spinal mechanics of a car accident

When a person is involved in a car accident, generally that means that the car they are in stops suddenly. It does not matter why the car stops. Dramatic breaking to avoid an animal or being T-boned: the physics are the same. Once the car stops, the car’s occupants keep moving until they reach something that stops them. Increasingly, seatbelts are what stops a person’s body from moving. That’s a good thing, but it can also lead to other types of injury.

Injury occurs at the place where the person’s body stops moving. The outside of the body stops, but the organs and the spine keep moving inside the body until they, too, reach a stopping point.

All of this happens in a split second. It is this violent action that often results in injury.

The lower back and cervical spine are vulnerable to injury due to the whip-like nature of this violent snapping. While the thoracic spine and sacral area are more stable, the lower back and neck are motile and will continue to move.

In some cases, this can be beneficial in a car accident. Consider this: a plate on a shelf will shatter when it falls to the floor because it is stiff and inflexible. This is why broken ribs often occur in car accidents. The movement of the lumbar spine and cervical spine may actually be protective of worse injuries.

Still, lower back pain after car accident is very common. In the U.S., three million people suffered injury in car accidents in 2016. It is challenging to separate how many of each injury occurred, but you can assume that, based on reported back pain statistics and the physics of a car crash, many of