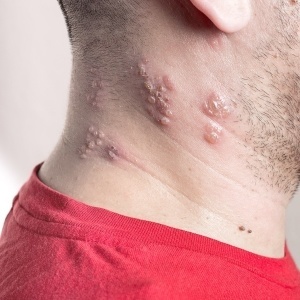 Symptoms of pain associated with post herpetic neuralgia can range in severity and quality. The pain may also be associated with disrupted sensory feedback throughout the body. More specifically, patients may complain of hypersensitivities in certain areas or even decreased sensation. It is not uncommon for individuals with post herpetic neuralgia to complain of intolerance to the contact of even soft and light clothing. Though quite rare, some patients may report symptoms of muscle tremor, muscle weakness, or even paralysis in cases where motor nerves are affected.

While the specific mechanisms underlying post herpetic neuralgia are not well understood, the condition generally develops following an outbreak of the herpes zoster virus.

The original outbreak of the virus is typically characterized by a fever, headache, burning or tingling pain (i.e., sensation of pins and needles), itching, oversensitivity, rash, and small blisters. For many individuals, these symptoms will resolve within several weeks of the original outbreak. In some instances, however, the neuropathic pain will persist for several months and is then classified as post herpetic neuralgia.

Typically, an individual will contract the herpes zoster virus, or chickenpox, during childhood and, as a result, develop a natural immunity that prevents the individual from suffering any additional outbreaks during adulthood. While the body has developed immunity, the virus itself remains dormant inside the body. Thus, there is some risk for the virus to reactivate during a period of time when the body’s immune system is compromised. 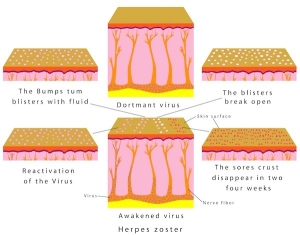 For example, when individuals are under high degrees of stress or are taking certain kinds of medication that suppress the body’s immune system, they are at an increased risk for developing symptoms of shingles. Since the individual had already developed immunity to the virus during the original outbreak, it is likely that they will not suffer from a fully blown attack. It is common for these individuals to develop a smaller outbreak characterized by a rash, pain, and discomfort. Further, this less severe outbreak is typically localized to one specific area (generally the area of original outbreak).

The pain and other symptoms associated with post herpetic neuralgia are thought to emerge as the result of damage sustained to nerve fibers following an outbreak of the virus. Nerves that are irritated or injured as a result of the outbreak send exaggerated signals of pain to the spinal cord and brain. In some cases, the pain and associated symptoms can be so severe that it begins to interfere with the individual’s daily functioning. More specifically, they may experience disturbance in their sleep and appetite. Further, their symptoms may cause them to miss work. In general, the symptoms associated with post herpetic neuralgia tend to remit over time.

Currently, there is no known cure for post herpetic neuralgia. Vaccines have been documented to lower the risk of developing complications related to an outbreak, even among older individuals.

While there is no cure for post herpetic neuralgia, there are several treatment options available to treat the pain and associated symptoms of the condition.

There are a number of topical agents available to provide relief from symptoms associated with the rash. For instance, your doctor may prescribe lidocaine skin patches. These are small patches that are infused with lidocaine, which is a topical, pain-relieving medication. Similarly, capsaicin skin patches may be used to relieve neuropathic pain, as capsaicin has known pain-blocking properties. These topical skin patches may be used for pain relief for anywhere from four to 12 hours. 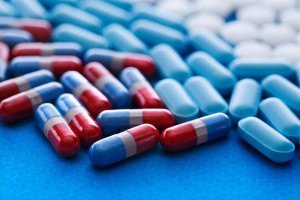 For some, non-steroidal anti-inflammatory drugs (NSAIDs) may provide pain relief. Anticonvulsants, in particular, (such as gabapentin) have received some support for their role in relieving neuropathic pain. These medications can be particularly effective in relieving the burning sensations that tend to accompany post herpetic neuralgia pain. Further, antidepressants may be prescribed as they alter the various chemicals within the body that control how pain sensations are interpreted. While this specific type of medication generally does not fully relieve the pain, they tend to be particularly effective in relieving deep, aching types of pain.

In more moderate to severe instances of post herpetic neuralgia, opioids may be indicated to provide more potent pain relief. These medications are highly effective; however, patients who are prescribed opioids must be closely monitored as they run the risk of misuse, addiction, and even possible overdose. 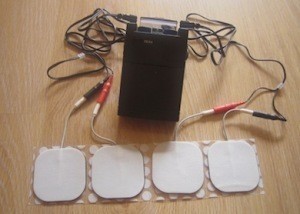 There are other forms of treatment that may be beneficial when employed as an augment to other treatment. These interventions include:

Post herpetic neuralgia is a neuropathic pain condition that is associated with the herpes zoster virus. It is common to contract this virus during childhood in the form of chickenpox. Though the body then develops immunity, the virus itself remains dormant within the body and presents a risk for reemergence, particularly during periods of elevated stress or suppressed immune function.